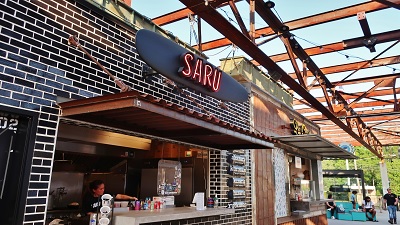 Located in the Keswick Avenue food stalls at 1801 N. Graham Street, SARU will continue to serve up tried and true menu favorites, created from the same beloved recipes. SARU is also bringing back the original employees from when the stall launched in 2020 at Camp North End.

SARU specializes in authentic Japanese ramen made fresh daily from pork bones and designed to be paired with thin white noodles. Additional cold noodle fare and beverages such as the refreshing Thai Ice Tea serve as perfect treats for escaping the summer heat in Charlotte.

Raydal Hospitality Group also operates La Caseta, a neighboring Camp North End food stall and is the team behind 18 locations of Sabor Latin Street Grill across North and South Carolina, as well as Three Amigos Mexican Grill and Cantina in Charlotte. In addition to purchasing this SARU location, Raydal has acquired the future expansion rights for SARU in North Carolina and South Carolina.

While SARU is the group’s first foray into Japanese cuisine, it aligns with their passion and focus on offering authentic food and dining experiences rich in culture, explains Raydal Hospitality Group Founder & CEO, Dalton Espaillat: “We pride ourselves on preparing delicious, fresh food from scratch, just like what’s always been offered at SARU. We look forward to bringing ramen back to Camp North End, a community we are already so connected to and committed to growing. As we expand our presence here, we want to be an agent of change and opportunity for our employees, sharing food that represents their stories and homes.”

SARU will operate from 11a.m.-8p.m. Sunday through Thursday and 11a.m.-9p.m. on Friday and Saturday. Pickup orders can also be placed online.

“We are happy to welcome SARU back to Camp North End, and particularly thrilled to be keeping it in the family with the Raydal Hospitality team,” said Tommy Mann, Development Director of Camp North End. “Dalton and his colleagues share our values to provide the highest-quality product while also making a larger positive impact on the people and places where they operate.”

Developed by ATCO, Camp North End is a state-of-the-art creative development that is being designed and curated to serve the most innovative companies in Charlotte. Select Camp North End buildings, including The Gamma Goat Building where the food stalls are located, were developed as part of a joint venture by ATCO and Shorenstein.

As one of the largest adaptive reuse projects currently underway in the U.S., the project is transforming a historic 76-acre site where people once manufactured Model T cars and assembled US Army missiles into a catalytic hub of creativity and ideas.

With over 300,000 square feet of space already redeveloped for work, artistic expression, dining and hospitality, entertainment, recreation, and community building, and another 1.5 million square feet on the way, Camp North End’s curated development will drive growth for the businesses that join its community.

Raydal Hospitality was conceived in 2014 when Dalton Espaillat, Founder, and CEO, realized that he would make something of his growing enterprise of restaurants starting to take shape. What began as an effort to save an underperforming Mexican restaurant in 2010 became a mission to create wealth opportunities within his community. By 2014, Espaillat, along with his wife Miriam and a small group of loyal employees, turned the original restaurant Three Amigos Mexican Grill & Cantina around and launched another concept, Sabor Latin Street Grill (that would later become the flagship of the group’s operations). The name comes from the first three letters of Dalton’s father’s name Ray and the first three of his to form the word Raydal. At first, they had started a construction company that poured commercial concrete foundations under the name  Raydal Construction. After dissolving the concrete company due to an economic decline, Dalton went to work expanding his Sabor concept at a rapid pace throughout the greater Charlotte Metro area.

Today, Raydal Hospitality Group owns and operates 20 restaurants of three core concepts; Three Amigos Mexican Kitchen & Cantina, Sabor Latin Street Grill, and La Caseta. Sabor also has two franchised restaurants in the Charlotte area. As the company continues to grow, new concepts and expansion are in the works throughout the Carolinas and beyond.

Raydal Hospitality Group is driven by the purpose of sharing the joys, heritage, and struggles of the Latin Experience. As immigrants themselves, Dalton (Dominican Republic) and Miriam Espaillat (El Salvador) work tirelessly to share with the community the stories and cultures of the many Latin countries that are represented in their restaurants and on the menu. By sharing food, we start to see how deep culture is interweaved in Latin American countries and how it becomes the very fabric that brings the community together.