These Black-Owned Businesses Are Shaking up Charlotte’s Food Scene

Peter Taylor These Black-Owned Businesses Are Shaking up Charlotte’s Food Scene The talent behind some of the best restaurants, bars, and food festivals to seek out in North Carolina’s Queen City. BY  Deanna Taylor December 16, 2021 Charlotte, North Carolina’s largest city, consistently ranks among the fastest-growing metropolitan areas in the United States. And the Queen City is emerging as

If you know anything about Charlotte’s buzzing culinary culture, then you’ve likely heard of James Beard nominee chef Greg Collier and his wife and business partner, Subrina, who moved to the area in 2012 and opened now-closed brunch spot The Yolk. (The couple plans to open a new incarnation in the South End neighborhood in 2022.) Last year, the couple debuted their new modern-day juke joint, Leah & Louise, in the city’s creative hub, Camp North End. The restaurant pays homage to Collier’s Memphis roots and the flavors of the African diaspora with dishes such as oxtail dumplings, Leah’s cabbage (named for his late sister), and Arthur Lou pie, made with Tang custard, oat crust, floral meringue, and fresh fruit.

The Colliers debuted in October a three-day event, the BayHaven Food & Wine Festival, a showcase that brings together dozens of Black chefs and mixologists as well as Black-owned wine and spirit brands from around the country. Throughout the weekend, Leah & Louise bar manager Justin Hazelton designed cocktails to accompany dishes from the festival’s all-star roster of chefs, including popular Charlotte pastry chef Jamie Turner (The Asbury); Whitney Thomas (5Church Atlanta), one of the few Black woman executive chefs in the country; and Anthony Denning, owner and chef of the perpetually busy Another Food Truck. The inaugural BayHaven festival featured a multi-course Harlem Nights themed dinner that saw attendees dressed in their best 20s and 30s-inspired attire, and tasting tents where guests sampled small bites and cocktails of more than two dozen national chefs and mixologists.

Adjoa Courtney, better known as Chef Joya, has followed a vegan lifestyle since she was about seven years old, when her love of cooking began in her grandmother’s kitchen. As she grew older, she began perfecting vegan versions of comfort dishes like macaroni and cheese, chicken and waffles, and bang bang shrimp. Since moving to Charlotte in 2011 she has hosted a series of pop-up dinners across the city, became the personal chef of R&B singer Fantasia, and released a series of cookbooks to help those just starting their plant-based or vegan journey easily transition with twists on their favorite dishes. She was named ‘best chef’ and ‘best vegan chef’ in Charlotte in 2019 by QC Nerve— a local print publication in Charlotte. As for what’s next, she says she has “so many things in the works, but the most exciting things are my new cookbook that’s great for transitioning kids to vegan cuisine,” plus a culinary tour. You can find Chef Joya at local vegan festivals, including the Vegan Vibes Series typically hosted in Charlotte’s summer months.

Born and raised in South Carolina’s Lowcountry and trained at Johnson & Wales in Charleston, chef Andarrio Johnson made his way to Charlotte in 2011, when he and cousin Anglee Brown started a soul food truck named Cuzzo’s Cuisine. The business was such a success that they soon opened a brick-and-mortar location on the West Side, where they serve their famous lobster mac and cheese, plus other favorites like fried chicken, collard greens, fried oysters, and shrimp and grits. On any given day, you might find celebrities like former Carolina Panthers running back Steve Smith or rapper Jack Harlow popping in for a meal. Johnson hopes to eventually franchise the brand with locations across the region and country. 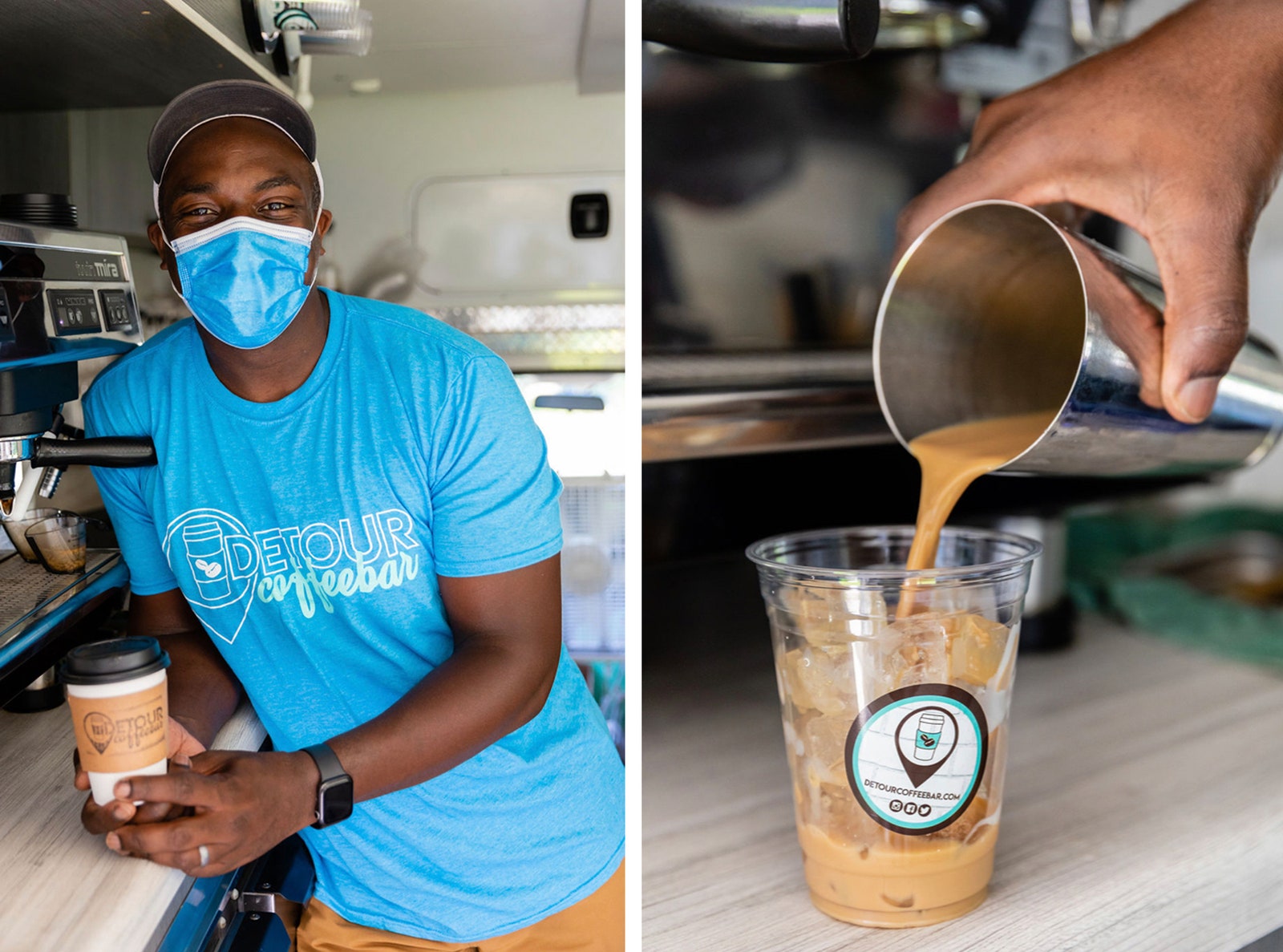 New Bern, North Carolina, native Mike Hargett left behind a job in corporate America to open this coffee bar on wheels in October 2019. His truck, D-Nice, can be found at weddings, school faculty appreciation events, and neighborhoods all over the city serving up a diverse menu of hot and cold espresso drinks and beverages that he names after current pop culture happenings like the Kayenne West (mocha, saigon cinnamon, and cayenne pepper) and the Destiny’s Chai (chai, espresso, local honey, and cinnamon). “Giving back to the community was a big part of my launching my business,” Hargett says. “It was something that was missing from my corporate job. I knew once I was able to branch out, it would be a big part of my brand.” Plans are in the works to expand the catering offerings of the truck for local weddings and events, increase the retail options by featuring more products from other local brands on the truck, and the launch of a second truck.

Afro-Latina mixologist Yashira Mejia started off as a restaurant server upon relocating to Charlotte from the D.C. area in 2013. She made the move into the cocktail world in 2016 and is now the bar manager of Instagramable tapas bar Para in the trendy South End neighborhood—a position not held by many women, let alone women of color. Yashira is known for taking traditional cocktails like a margarita, and adding her own Afro-Latina flare. A Super Yosh—her nickname—margarita features Casamigos Respado, passion fruit juice, fresh lime juice, guava syrup, and a pink Himalayan salt rim made with guava merengue and Tajin. And in true Yashira fashion, she adds beautiful garnishes to every cocktail, from rose petals to dried fruit.

After graduating from Johnson and Wales, friends Daryl Cooper and Oscar Johnson decided to come together to bring a little piece of their native Virginia to Charlotte with the launch of their Virginia seafood-inspired food truck Jimmy Pearl’s in March 2020. The business began as a temporary pop-up before expanding to a food truck that has a residence in Camp North End and was recently named food truck of the year by local publication Unpretentious Palate. Expect entrees like the Uncle Gene’s fish sandwich (fried local fish topped with Jimmy sauce, hot sauce, and homemade field pea slaw on a brioche roll) and Box of Yock, a noodle dish from the Virginia Tidewater region inspired by ramen and made here with smoked chicken and tomato broth, collard greens, and furikake.

One of the most unique dinner parties you’ll ever attend, Serving The Culture burst onto the Charlotte scene in 2019 thanks in part to attorney and chef Shelton Starks. The Charleston native created the multi-course dinner and music series in conjunction with some of the region’s best culinary talents. The events, which are held about four times a year, pay homage to Black musical icons like Wu-Tang Clan, Mary J. Blige, and Missy Elliott with dishes and cocktails inspired by the musical artists, their lives, and their catalogs. During the Wu-Tang dinner, for example, Starks paid homage to the group’s Ghost Face Killah with a fried red rice topped with PBR beer battered crab croutons and a ghost pepper duck sauce. “The culinary artists of Serving the Culture are not often afforded the opportunity to be featured and celebrated,” says Starks, who hopes to expand the series to other cities. “We wanted to provide an event where they are showcased and celebrated for their artistry.”

Tamu Curtis moved to Charlotte in 2012 to launch her first brand, Liberate Your Palate, a traveling cocktail class where she hosted fun but educational cocktail events around the area. This September, she opened The Cocktailery, a barware and cocktail supply store that also offers mixology classes and team-building events and features an all-Black, all-woman staff. Curtis also sells several products from Black-owned Hella Cocktail Co. including the brand’s apple blossom bitters and a ginger and turmeric bitters & soda.

After graduating from Johnson and Wales Charlotte, friends and chefs Jamie Barnes and Greg Williams launched the What The Fries food truck out of a former FedEx delivery truck in 2015. After years of long lines, in March the duo opened their first brick-and-mortar location where they hand cut each and every fry. Standouts include their hibachi shrimp fries (topped with bok choy, carrots, scallions, and homemade yum yum sauce) and over-the-top bread pudding tots, and the owners are hoping to expand with additional trucks and a second physical location in 2022.