Flavor-filled and dairy-free ice cream shop coming to Camp North End BY PHILIP FREEMAN UPDATED MAY 25, 2022 8:14 AM   Charlotte is no stranger to ice cream — with over 90 shops including homegrown favorites such as Golden Cow Creamery and Two Scoops Creamery, an ice cream shop isn’t hard to find — unless you’re at Camp North End.

Charlotte is no stranger to ice cream — with over 90 shops including homegrown favorites such as Golden Cow Creamery and Two Scoops Creamery, an ice cream shop isn’t hard to find — unless you’re at Camp North End. Soon, that will change.

Most of Seemingly Overzealous’ dairy-free ice cream is made using almond milk and coconut or some other dairy-free creamer. The decision to go dairy-free was driven by the growing number of lactose intolerant children, however the ice cream is intended for everyone to enjoy — without anyone having to sacrifice flavor. Honey helps sweeten many of the recipes, so the ice cream is not branded as vegan.

ICE CREAM FLAVORS: Expect staples such as mint chocolate chip and vanilla alongside specialty flavors like: 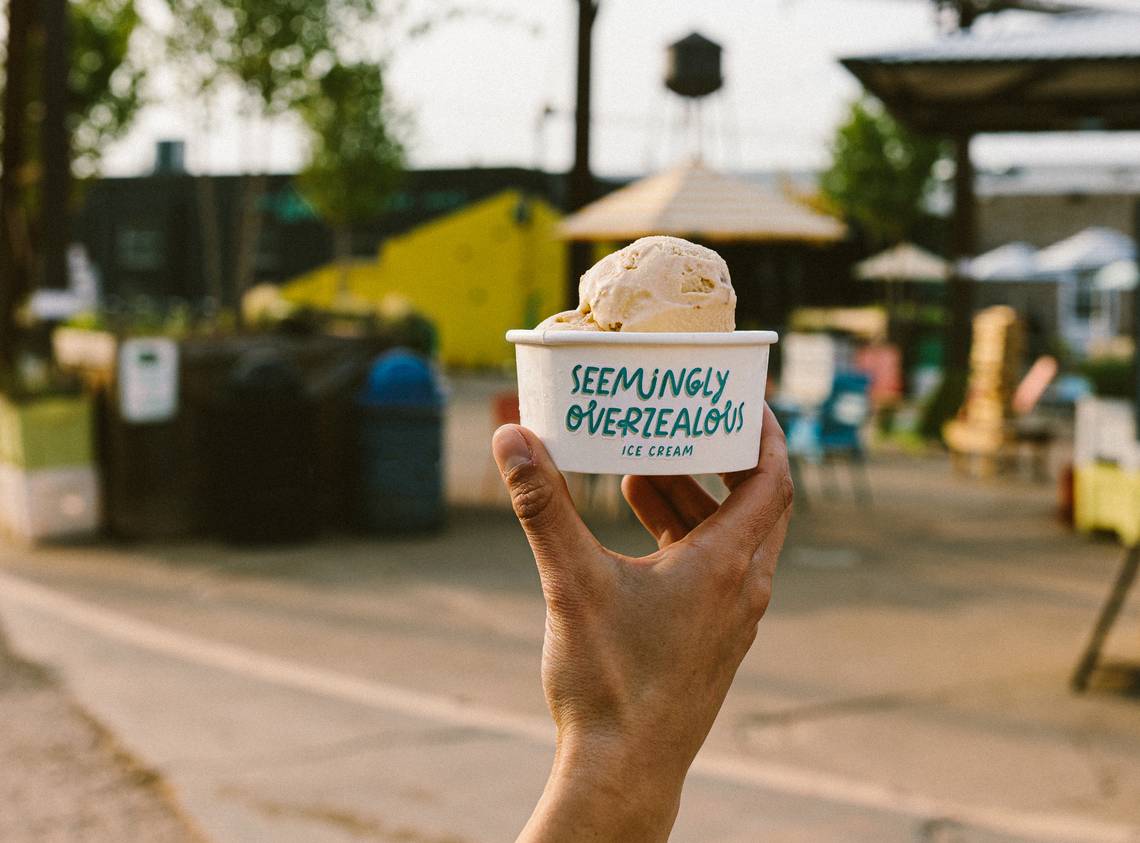 The news comes as more development plans unfold at Camp North End, including retail, multifamily and a parking garage.

Seemingly Overzealous co-founders Garrett Tichy and Jessica Berresse told CharlotteFive earlier this week that they are thrilled to bring ice cream — free of dairy, yet full of flavor — to Charlotte.

“We’re all about the idea of more people being able to enjoy our ice cream without anyone having to sacrifice flavor,” Tichy told CharlotteFive. “It’s far from fat-free. It’s not good for ya, but it’s great for ya if you know what I mean.”

Early in the pandemic, Tichy began making ice cream as a hobby. The Hygge Coworking founder built quite a following on Instagram discussing pie, politics and social good. When he started posting about ice cream, however, he really caught Berresse’s attention. She sent a DM, sacrificially offering to be a taste-tester.

The pair’s first date was full of conversation — and ice cream. Dine-in wasn’t an option due to the pandemic, so Tichy showed up with a smattering of to-go ice cream: Golden Cow, Jeni’s and Two Scoops — and of course, a homemade pint. As the two talked for hours, they realized a shared desire to get past the superficial and really learn about one another.

“It’s more than just ice cream for us,” Berresse added. “We want this to be something that brings people joy. And to create a place where all feelings — good or bad, big or small — are welcome.”

This is reflected in the pair’s vision for Seemingly Overzealous. “We want to make great ice cream and encourage people to have more thoughtful, deeper conversations,” Tichy said. To this end, they’ve partnered with branding firm Mad Goat Studio to create QR codes on cups and pints that lead to a question meant to spark conversation.

Thoughtful details will be woven into all parts of the business. Creative director and designer, Pablo Agurcia has created a logo that may just look like shapes — but there’s more. “Each shape is actually a character, or emotion,” Tichy said. “Seeing yourself in an ice cream brand is challenging, yet we want people to see themselves in these characters.”

A brick and mortar store wasn’t always in the plans, but it’s a seemingly natural output for the pair that includes ice cream time on vacation agendas. Initially, they shared their homemade ice cream with friends and later sold it online. As demand increased, the two realized the potential for a business.

When a friend asked if they could make something dairy-free, the challenge ended in a delicious result. Now, they’ve experimented with dozens of exciting flavors, including matcha with honey and lemon, and peanut butter and jelly. Berresse is a particularly big fan of the banana candied pecan — “it hits the spot for me.”

Berresse and Tichy anticipate partnerships with local vendors across Camp North End and Charlotte. The pair plans to open the 700-square-foot shop in late summer or early fall.

And for the name? It’s a nod to the beginnings of their relationship — when they decided to disregard the fear of seeming overzealous — and put it all on the table. “We’re all about helping people see there should be no shame in who you are,” Tichy said. “Jess has brought out this comfort in me.”