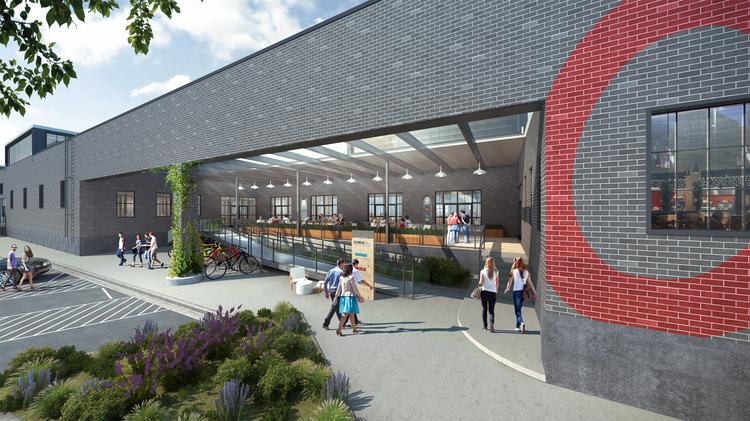 A building that once served as an assembly site for military vehicles will soon house office and retail tenants.

ATCO Properties & Management has begun preliminary work on the Gama Goat Building, at 1701 N. Graham St., which marks the first step of significant redevelopment on the 75-acre site in Charlotte’s North End. New York-based ATCO is spearheading one of the largest adaptive-reuse projects in the city with Camp North End, which encompasses more than 1 million square feet of warehouse space along Statesville Avenue to be upfitted and modernized for office, retail and other uses.

Damon Hemmerdinger, co-president of ATCO, said the building name came from a community meeting last year when the developer was going through the rezoning process. A Druid Hills resident in attendance told the developers about the history of the building at 1701 N. Graham St.

“The Gama Goat, an Army truck that was predecessor of the Humvee, was built in this building,” Hemmerdinger said. “We liked that specific history.”

In fact, much of the Camp North End site has a military history. Originally built as a Ford Model T factory in the 1920s, the property served as a quartermaster depot for the U.S. Army and a missile plant later in the 20th century. Its most recent use before ATCO purchased the property was as a distribution center for Rite Aid.

The majority of the 140,000-square-foot Gama Goat Building is being targeted for office users, Hemmerdinger said, with up to 10,000 square feet of retail space to be accommodated for in the building. Hemmerdinger estimated the building will be ready for tenant occupancy in early 2019.

“The majority of the square footage will hopefully be leased to professional offices in the creative sphere,” Hemmerdinger said. “We’ll be combining (that) with local businesses that are making things, probably food and other kinds of products.”

The building will include high ceilings, clerestory windows, steel beams, wooden trusses and exposed brick, according to ATCO.

As part of the building upfit, ATCO will embark on the first phase of an extension of Keswick Avenue, which will add another east-west connection through the site when complete. The Gama Goat Building will also include passageways that cut through the building to connect with cross-streets in the Lockwood neighborhood. Those streets will be lined with ground-floor retail, according to ATCO, and the Camp North End project as a whole will have a pedestrian “spine” that will eventually run through all warehouses and buildings on site.

In future phases, ATCO will upfit and reuse the buildings at 1776, 1810, 1820 and 1830 Statesville Ave., as well as embark on some new construction. Hemmerdinger said no specific timeline has been established for those future phases.

“This is the first of the large-scale redevelopment in the project,” he said, adding that the Gama Goat Building was selected as the first piece of the project because of its connectivity to Graham Street and because utility infrastructure is largely already in place. ATCO paid about $4 million for the North Graham Street building in the summer of 2016, according to Mecklenburg County real estate records.