Charlotte’s flourishing vegan scene Vegan chefs and Vegfest create opportunities to explore and connect   By Shannon Blair Charlotte Vegfest at Camp North End. Photo courtesy Executive Chef Julia Simon recalls tears welling up when she received the Food Stall of the Year award at The UPPYs, a celebration of the best of Charlotte’s food and beverage industry. Plant Joy at Camp

Vegan chefs and Vegfest create opportunities to explore and connect 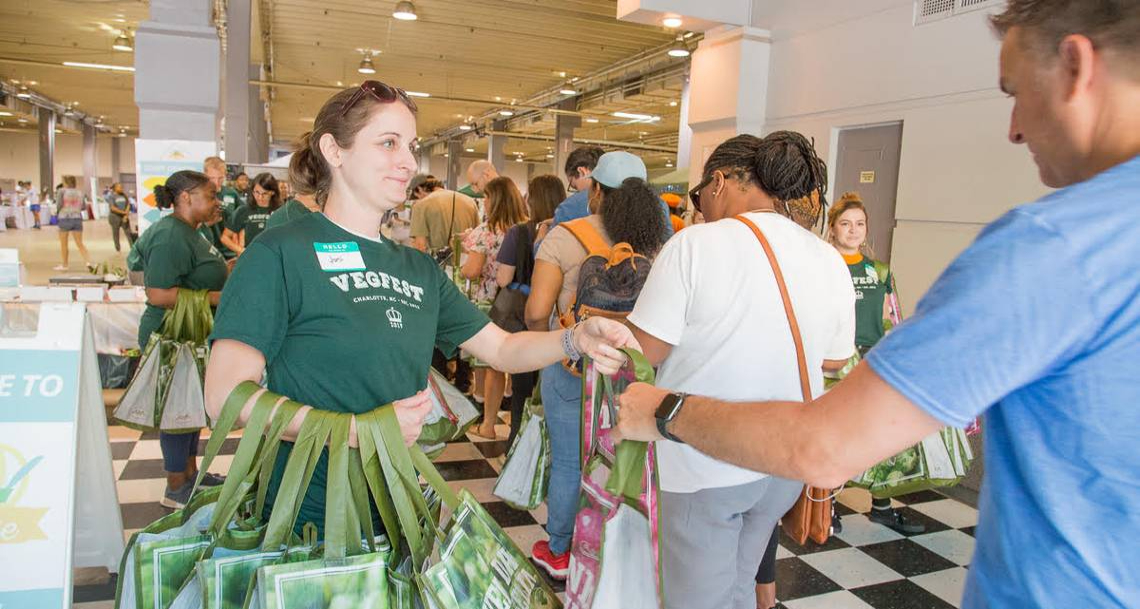 Executive Chef Julia Simon recalls tears welling up when she received the Food Stall of the Year award at The UPPYs, a celebration of the best of Charlotte’s food and beverage industry. Plant Joy at Camp North End, a vegan establishment, garnered the win –– among plenty of notable, non-vegan competition. “It was a legitimizing moment,” says Simon, who has worked to raise awareness of vegan cuisine and its benefits for more than a decade. This April, she’ll celebrate ten years since co-founding her other business, Nourish Charlotte, a vegan and gluten-free meal delivery service.

While many in the industry floundered, Nourish experienced almost fifteen percent growth in 2020 and another fifteen percent again in 2021. This success made a food stall expansion of vegan services possible. Plant Joy now has a loyal following and regularly greets new customers. The enthusiasm for plant-based foods is on par with national interest.

“Food brands, restaurants, meal-delivery kits, public schools, even presidential candidates are all talking plant-based foods,” per a September 2019 Forbes article. “And now, a new survey from YouGov and WholeFoods Market finds that 63% of millennials are trying to incorporate plant-based foods into their diet.”

For Simon, plant-based diets are more than a passing trend, and the culinary possibilities extend well beyond the processed plant-based food items so popular in today’s marketplace. She describes her approach as being “at that confusing intersection of plant-based and farm-to-table.” One of Freshlist’s biggest customers, Simon sources local produce to transform whole fruits and vegetables into interesting, flavor-filled vegan dishes rather than relying on mass-produced, packaged plant-based food items. She cites as her biggest influences Asian cuisine and vegan restaurant experiences she’s had in New York and California. One of her favorites is Oakland’s Millennium Restaurant helmed by Chef Eric Tucker, author of The Millennium Cook Book and The Artful Vegan. “It takes talent to do vegan food that way,” she says.

Still, Simon feels there needs to be room for everyone at the vegan chef’s table, including those who incorporate the plant-based food products we see cropping up more and more on grocery shelves and restaurant menus. She notes that the owners of Romeo’s Vegan Burgers and Chef Joya are creating access points and transition strategies for those curious about vegan dining. “It’s a progression,” Simon says, of drawing people to a diet more reliant on plants. Before regular Nourish customers become regulars, for example, they might add in vegan foods here and there for a couple of weeks. When they start to feel better and better healthwise, they begin to wonder how they could feel if they ate even more plants. They might try ‘Meatless Mondays’ more frequently or drive through Romeo’s instead of Burger King.

Romeo’s Vegan Burgers started as a food truck and added a brick and mortar location at 5518 South Boulevard in December 2021. Co-owners Tigo Faulkner and Lamont Heath provide a 100-percent vegan menu by outsourcing Beyond Meats and Impossible Foods. While the plant-based meals may not be from whole foods, the concept is generating interest and avenues to move away from cholesterol-laden burgers and fries at fast food chains. 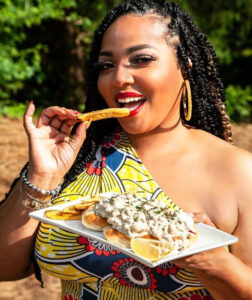 Adjoa Courtney, known to many as “Chef Joya”, has carved out another entry point for those curious about vegan and vegetarian dishes –– especially when it comes to preparing their own. She was not always vegan; her parents were the ones who introduced her to plant-based eating at home as a child. She moved away for college and left behind a plant-based diet; however, she quickly resumed veganism after noticing a decline in her mental sharpness, overall energy, and general feelings of wellness. Courtney and Simon agree about the benefits they and their clients enjoy from a plant-based lifestyle: medically-supported health gains from plentiful phytonutrients (compounds found in plants with protective and disease-resistant properties) and a way to practice environmental and animal welfare stewardship.

Practicing vegans and those who have never taken a first vegan bite are welcome in Courtney’s world. “I’m known as the queen of transitioning nonvegans to vegans because of my non-judgmental approach,” she says. “I am all about the food and ensuring that people can have tasty, healthy options full of flavor and love. I make food that tastes, looks, and smells familiar to make the transition to vegan just a bit easier.” At cookingwithjoya.com, she offers a myriad of services like consulting, cooking classes, and instructional videos. She also features many of her most popular recipes, like baked Mac & Cheez, Not Your Mama’s Meatloaf, and Cajun Fried Chik’n in her vegan soul food cookbook, It’s Soul Mahmazing, to help people along on their plant-based journey.

Like Courtney, Simon feels compassion is pivotal in shifting people to more plant-based dining. She acknowledges there are fanaticals who have a tendency to deter and discourage others who fail to meet their standards. Just as not all vegan foods are prepared equally, not all vegans behave the same. “I would tell someone that if they think vegans are nuts, to try again,” Simon says. The chef also tries to remind fellow vegans who shame others that they likely were not always vegan. Simon remembers how difficult it was for her to opt out of animal-based butters and cheeses in moving to be fully vegan. “We need to meet people where they are.” 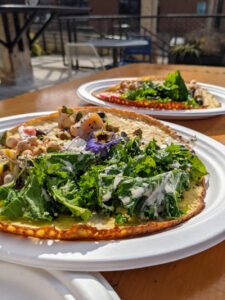 For those new to vegan fare, Simon encourages them to visit Plant Joy and try the popular “Yam and Cheese” sandwich or the signature “Falafel Tower.” Another best seller is the “Grilled Greens,” reminiscent of spanakopita. She also recommends basically anything on socca, a chickpea crepe, for a light yet satisfying meal.

Creating a culture where plant-based lifestyles are commonplace rather than a rarity is possible but filled with hurdles. “I hope to see more fully plant-based restaurants opening,” Courtney says. “But I just want to see people embrace the lifestyle and incorporate it into their everyday lives,” she says.

One significant obstacle is price point. Romeo’s basic burger, for instance, is about triple the cost of Burger King’s. Nourish meal delivery is more expensive than a national operation like Just Fresh since it produces fresh, never-frozen meals with locally and sustainably-sourced, high-quality, often organic ingredients. Another difficulty is cohesiveness within the vegan community itself. Simon applauds that this group of chefs and enthusiasts is growing in terms of size and people of color with great momentum but has a hope for more communication and connectedness. For instance, there are two overlapping vegan events happening in May, creating a conflict for those who wish to attend and participate in both.

Even with these challenges, people have demonstrated readiness to explore plant-based cuisine. “It’s growing by leaps and bounds,” Courtney says. “This is a great time to be vegan in Charlotte. And it’s only getting better.”

In addition to managing Plant Joy and Nourish Charlotte, Simon currently serves as president of Charlotte Vegfest, a 501(c)(3) non-profit aimed at strengthening the vegan community and bolstering vegan and vegan-friendly businesses in Charlotte, N.C. You can follow Vegfest to stay in-the-know about vegan-related news and events like the upcoming free Vegfest celebrations, complete with live music. Vegfest Jr. and Vegfest 2022 will showcase a range of dining options from local vendors and provide educational opportunities through cooking demos, nutritional experts, and speakers.