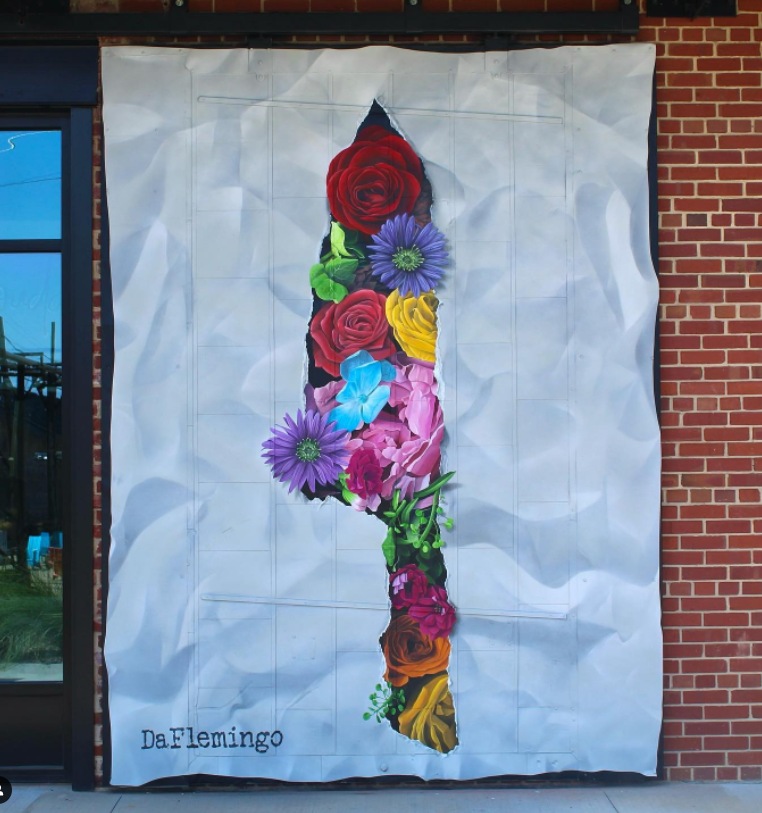 Darion Fleming at Babe & Butcher
Darion Fleming’s massive murals, which blend startling realism with stylized, two-dimensional forms, appear all over the Charlotte area. His piece at the front of Babe & Butcher stuns on a smaller scale, with its emerging floral forms.

Charcuterie shop Babe & Butcher opened at the site in 2021, and like many of the businesses at Camp North End, its entrance is marked by work from a local artist. Fleming says the general charge was to “marry the softness of the Babe’s personality with the precision of the Butcher’s.” In lieu of depicting an actual knife, which may have more violent connotations, he “cut out the shape of a knife in a piece of paper and overlay that onto a bed of flowers, which is exactly what we did in order to get the reference photo I ended up painting.”

The most difficult part of the mural was the size, he says. At this scale, the vivid design, with all of its delicate details, became time-consuming. The solution was not limiting himself to a single utensil. “I used small brushes throughout the entirety of the flowers and spray painted the white paper,” he says. “It turns out tight brush work takes a while, as this took about two months to complete. The (door) surface certainly didn’t make things any easier. I only worked at night, from about 9 p.m. until 4 or 5 a.m. for 5 to 6 days a week.”