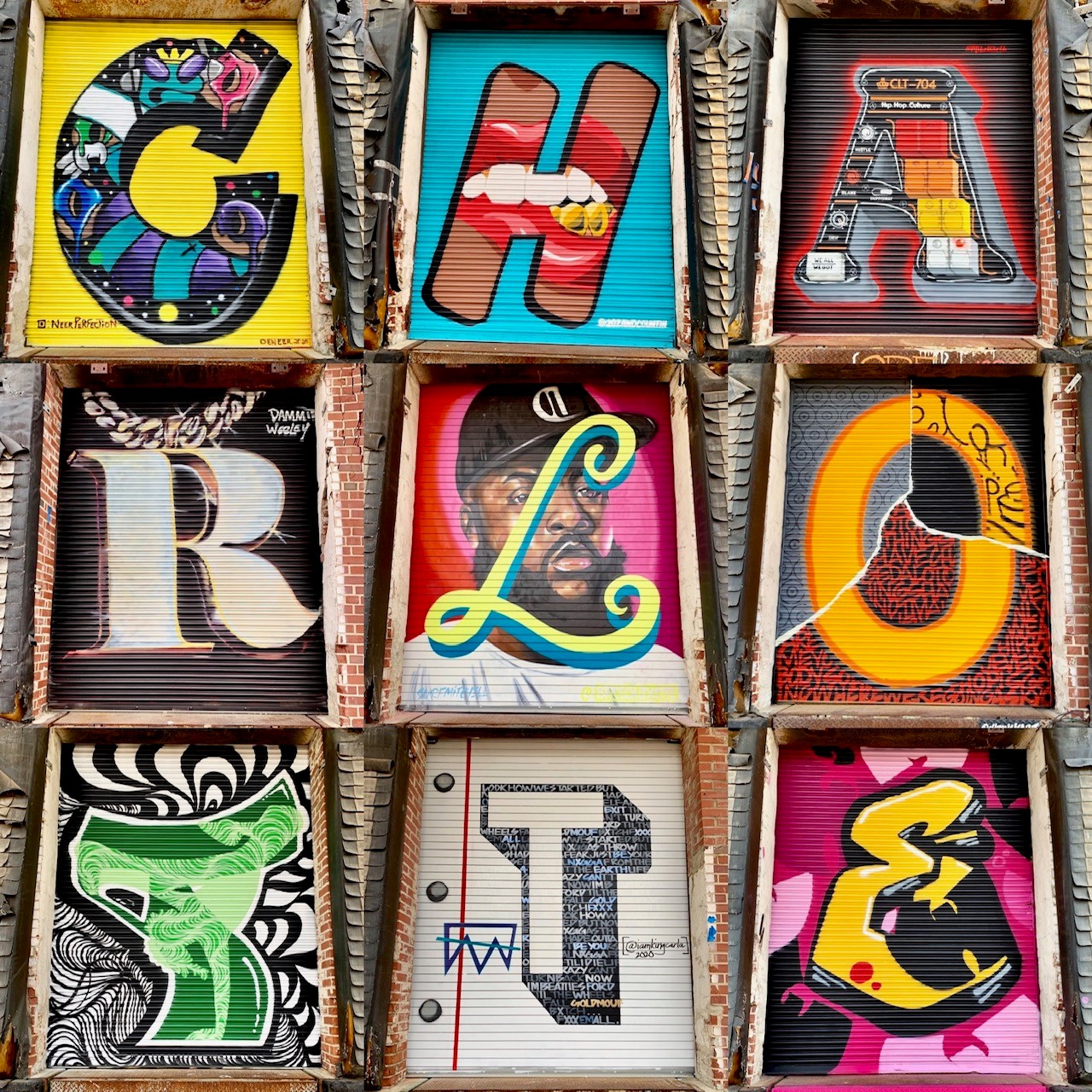 Blumenthal Performing Arts began “We Are Hip-Hop,” an ongoing celebration of local music and culture, in 2020. The project’s organizers come from varying disciplines: Boris “Bluz” Rogers is an Emmy-winning spoken-word poet; A.J. Glasco is a dancer and choreographer; Greg Jackson stokes community dialogue and guides youths with the nonprofit Heal Charlotte; and Bree Stallings is a visual artist, muralist, and teacher.

An inaugural festival in November 2020 was postponed due to COVID-19. Yet, the project’s visual arts arm, headed by Stallings, was able to execute and unveil a dynamic statement across 10 garage doors at Camp North End. The nine letters in CHARLOTTE are each tackled by nine different creatives. Stallings previously worked with Time Out Youth’s teenage members on one of the Ford Building’s garage doors, but this is her largest project to date at Camp North End. “I was able to assemble my dream team of artists,” she says today. “I was thinking about how their styles would flow, but I didn’t have to approve any of their designs. I let them determine their own expression with each letter.”

DeNeer Davis tackled C, with an ode to the Charlotte Hornets and a doughnut representing beloved producer J. Dilla, among other symbols. H comes from 2 G’s (Garrison Gist), with the grill and lipstick a nod to Jill Scott. Mike Wirth paid tribute to Roland’s TR-808 drum machine in creating A. Dammit Wesley’s R chain recalls the rap album covers of the 2000s. Stallings’ portrait of local hip-hop artist Elevator Jay takes centerstage with L, while CHD:WCK! uses his text talents to honor graffiti with O. The Ts come from OWL and King Carla (Carla Lopez), respectively, with each’s practice already carrying street art inspiration. (Lopez’s is full of hidden messages worth a gander, by the way). Finally, the dripping E was painted by Frankie Zombie, who used the Wu-Tang Clan logo as one visual reference.

Stallings describes the moment of Elevator Jay learning of his representation as “really emotional.” Soon after, he posted a photo on Instagram with his parents standing beside the door. “He’s a staple,” Stallings says. “He’s a legend in Charlotte, and his music is like a map of the city. He was so thankful when I told him, and I said back to him, We have to give flowers to the living.”

As the “We Are Hip-Hop” project begins to unveil its other components in 2021, these first pieces—and the thousands that have flocked to them for selfies—showcase the vibrancy and impact of the genre on Charlotte’s creative sector.