Art for all: How Charlotte’s Van Gogh Exhibit is increasing accessibility

Author: Emma Korynta Published: 8:34 PM EDT August 16, 2021 Updated: 5:50 AM EDT August 19, 2021 CHARLOTTE, N.C. — The Immersive Van Gogh Exhibit opened its Charlotte location at Camp North End this summer and quickly got a reputation for the innovative way it approaches Vincent van Gogh’s classic works. Through intermingled paintings and curated music, the exhibit has provided many with the opportunity 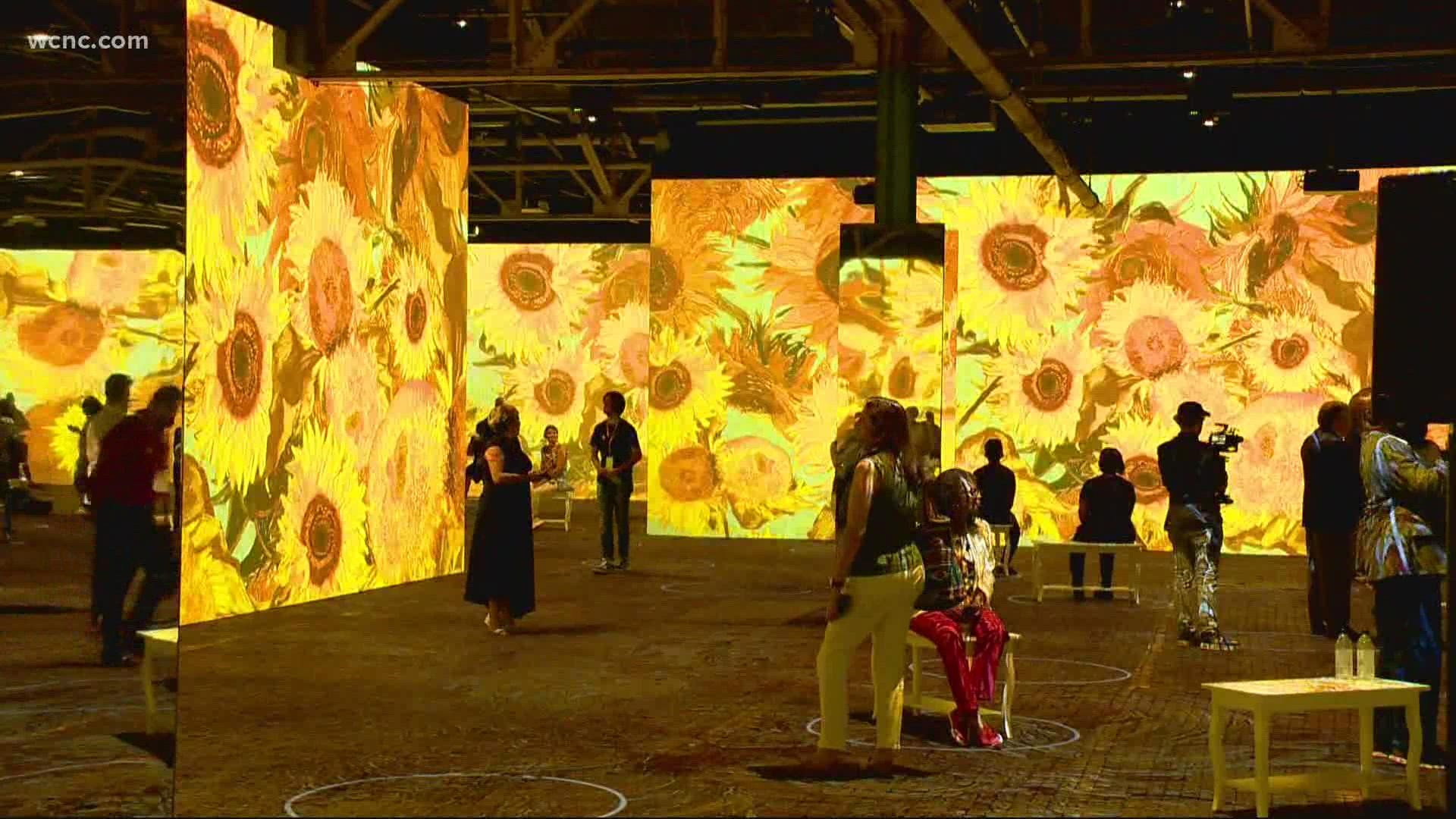 CHARLOTTE, N.C. — The Immersive Van Gogh Exhibit opened its Charlotte location at Camp North End this summer and quickly got a reputation for the innovative way it approaches Vincent van Gogh’s classic works.

Through intermingled paintings and curated music, the exhibit has provided many with the opportunity to glimpse inside the artist’s mind.

Metrolina Association for the Blind and Blumenthal Performing Arts have worked together to make sure that experience is still available for people who are visually impaired. People with visual impairments had the opportunity to attend a “relaxed performance” with reduced loud noises, modified lighting, adapted audience capacity, and more to transform the exhibit into a more comfortable experience for those who need it.

With the relaxed performances, attendees have a bit more freedom to move around, make sounds, and experience the exhibit in the way that best fits their needs.

‘Art is so important to be accessible ‘

Sarah Milledge, who is visually impaired, participated in the Van Gogh experience last month. Milledge said her boss with Metrolina Association for the Blind went with her and provided descriptions of what was going on — brushstroke by brushstroke.

“It was such an amazing experience,” she said. “The art really came to life.”

Milledge was born with 20/20 vision but lost it when she was 23. Because of that, she had the added experience of previously seeing some of Van Gogh’s paintings. Still, Milledge acknowledges there was much of his work she hadn’t seen. She says the ability to have the art described as she was there brought it to life for her.

Milledge said she would also encourage others who haven’t had to consider the impacts of visual impairment to put on a blindfold and attend an exhibit, saying different senses tap into the other elements of art.

“Art is so important to be accessible. You know, a lot of people think when you can’t see anymore, or you lose a sense that you’re maybe not able to enjoy that in the same way,” she said. “If I was walking down a sidewalk in Charlotte, I definitely would miss some of the murals and things like that. And so if we could get those described, if we could just get different museums to participate, then I would be able to have the same experience as everyone else.”

Charlotte artist Mike Wirth was one of the Van Gogh exhibit’s artists in residence from July 22 through Aug. 16. As part of his residency, he largely focused on the theme of how technology improves access to artwork and helps in the process of making art. One of his pieces: a recreation of “Starry Night,” specifically designed for those who are visually impaired.

One question served as the inspiration for this piece, made in collaboration with Joel Bonasera of Making Things CLT: what if you couldn’t see “Starry Night” but you had the opportunity to feel its impact?

Wirth himself has been dealing with early-onset hearing loss for about four years. He said he’s had to start using hearing aids and subtitles and expects that one day he may lose hearing altogether.

“Life will change for me at some point, you know, and I just thought, ‘wow, you know, that’s huge’. That’s heavy,” Wirth said.

That perspective helped him to understand why bringing art to everyone was so important.

“When things change in your life and your senses change, your perspective changes,” Wirth said.

The “Starry Night”-inspired piece uses texture and height to capture the emotion and impact of Van Gogh’s work. Much like a textured globe, parts of the piece are taller or shorter to convey the dimensions in the visual landscape of the original piece. 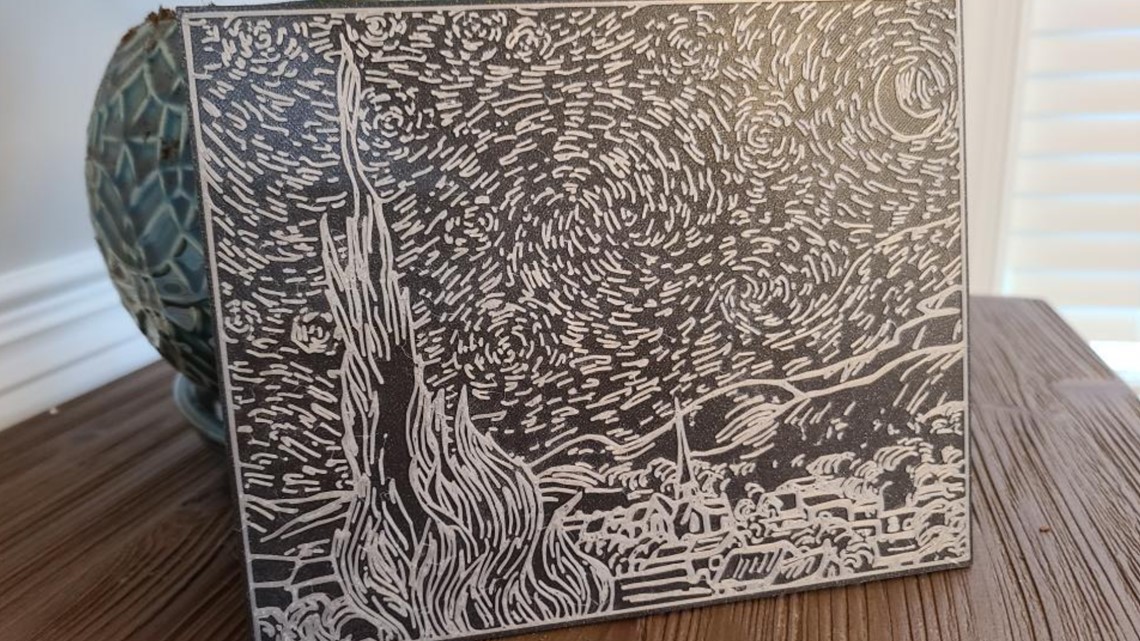 Wirth said as technology enables artists to create more mediums of art, it should be a given that accessible formats of art follow along with it to include everyone. He said he doesn’t see his 3D piece as profound, but rather something that should be more commonplace with all art: a way for everyone to experience it. 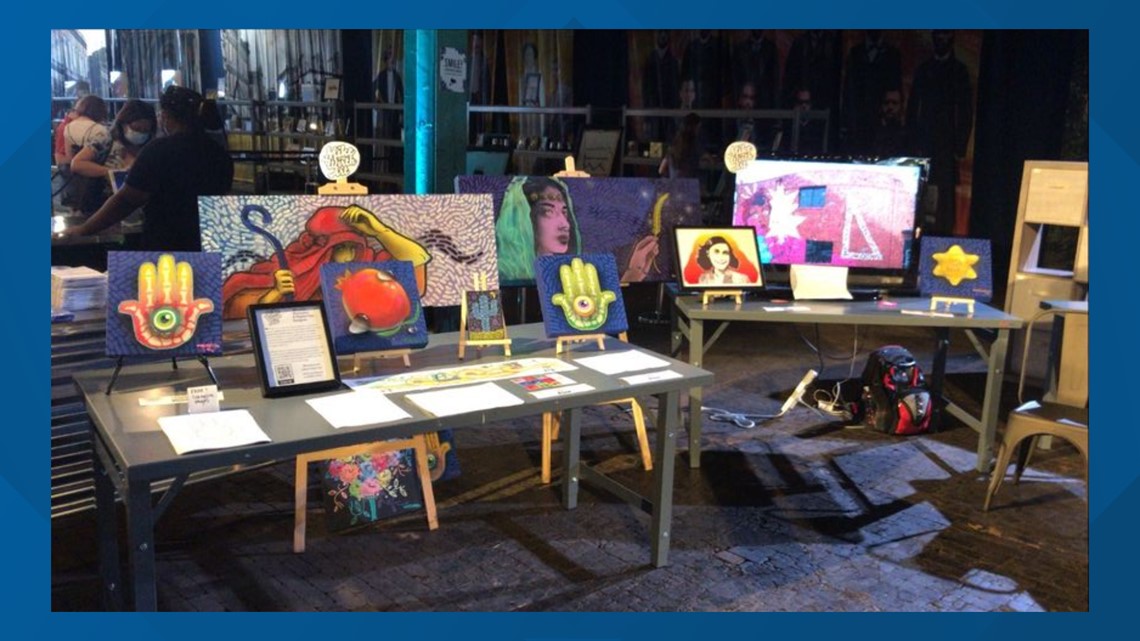 “When we do these things, we just provide dignity to folks, we’re not there to change their lives, you know, like in the crazy, profound way,” Wirth said. “Yeah, I made these plates, because I just want folks to go in there and have a little bit of dignity and feel inspired.”

Eva Crawford is currently an artist in residence with the Van Gogh exhibit. As part of her residency, Crawford created a textural painting inspired by Van Gogh’s “Sunflowers” piece that is meant to be touched.

Crawford said she spoke on Saturday with a woman who is visually impaired. The woman felt her textural painting and proceeded to describe the circle at the center of the flower and branches — ultimately determining it was a sunflower. 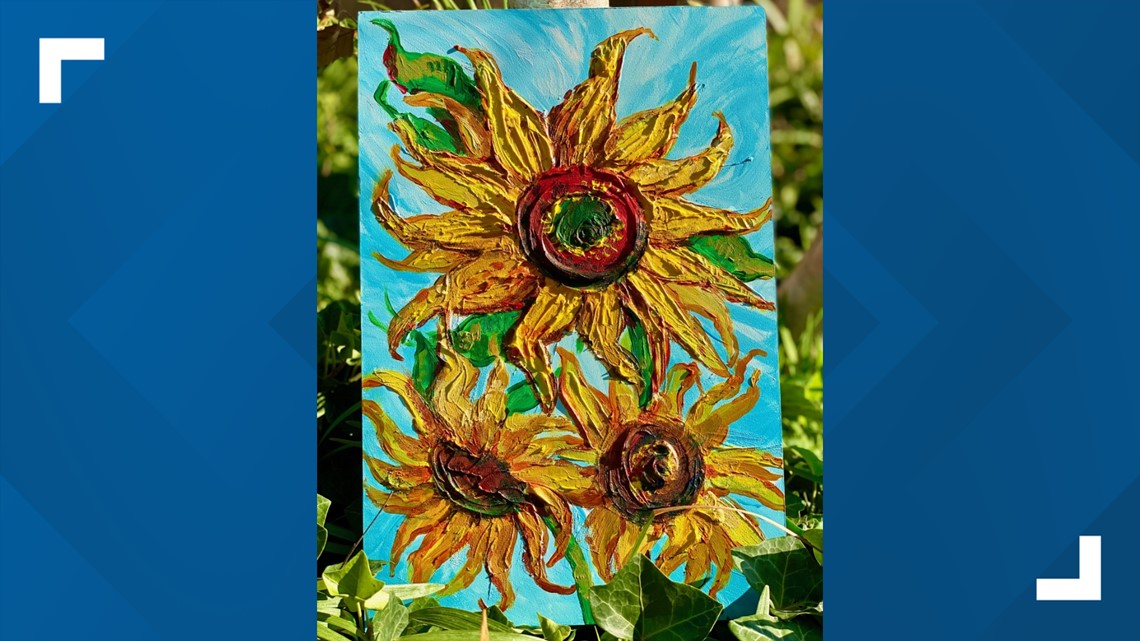 Crawford said this form of art for her has proved helpful for people who need assistance seeing Van Gogh’s work. She is now looking into using Mr. Sketch scented markers in the future to provide an additional element after the woman told her it can help with color identification.

‘It brought it to life’

Marashi said for her, one of the elements of the Van Gogh exhibit that made it so impactful was the curated audio that accompanied the visuals. The loud music flows with the videos, thematically changing as the tone of Van Gogh’s pieces changed as well. She said the audio combined with verbal descriptions of pieces heightened her experience.

“It made it wonderful,” Marashi said. “That was one of the best parts that it made it more — it brought it to life in a way that just like, it stirred up emotion in you. Like, at the end of the ‘Starry Night,’ I had tears in my eye.”

Marashi recommends everyone consider participating in the experience, saying the atmosphere of the event itself moved her.

“I understand it’s a visual thing, but just being, again pardon the pun, immersed in that environment is experiencing art,” she said.

For those still hoping to attend the Van Gogh exhibit, tickets remain on sale through October. Anyone with visual impairments who hope to attend a relaxed performance can contact the Metrolina Association for the Blind for more information. Blumenthal is also looking into an additional relaxed performance as the exhibit was extended from its initial closing date.

“People are the same people,” Marashi said. “It’s just they may have some different needs. And having, you know, having that inclusivity in makes a big difference emotionally in that person’s life as well.”